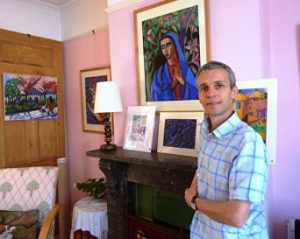 What is your connection with St Christopher’s hospice?

The idea of working in a hospice had never occurred to me, but after 14 years working in the NHS I arrived at St Christopher’s Hospice to join the small team of allied health professionals using a range of therapies including including physiotherapy, occupational therapy,  dietetics  and speech and language therapy . The move from a big busy general hospital to St Christopher’s  involved a complete change of mind set.  But once the adjustment had been made I began to feel more at ease and appreciate the sense of peace which characterises the hospice.

How and why did you link SE24 to St Christopher’s hospice?

The idea that  we  meet people not by chance but because we are meant appeals to me.  I never entirely believed that coming to St Christopher’s  was an accident and I would say the same about discovering a small set up called SE24 or Sustainable Energy 24. I came across them while looking through one of the Herne Hill Forum’s news bulletins. What caught my attention  was the fact that  they were a local set up. I am  resident of Brixton and SE24 is literally just up the road from me. They were also dealing in something I believed in passionately,  alternative energy sources.

When I read that SE24 was putting solar panels on the roof of nearby Dulwich College I  began to wonder if the same could be done at St Christopher’s Hospice. It certainly had the roof space but I wasn’t  sure that me walking into the  Chief Executive’s office suggesting they cover the hospice roof  with solar panels would go down too well.

The key was Ian, a friend and colleague of mine who happened to be in charge of estates and facilities. Ian is a practical sort of person so I wasn’t too sure how he would take to the idea of sticking solar panels on the roof. He nodded when I told him about it and didn’t say much. After a couple of weeks  I imagined he had forgotten all about it. Then when I bumped into him one day in the corridor and asked him if he had considered my suggestion he told me that the Chief Executive was enthusiastic and keen to explore it further.

I am  very pleased to be part of an organisation that is willing to stick its neck out and run with a project like this. And I really do hope the example of St Christopher’s will inspire others organisations to think about doing the same.

You also went the next step and became an investor in SE24’s Phase 2 projects. Why did you invest?

I became an investor in SE24 for the simple reason that I believe in what they are doing.  As the realities of climate change are making themselves felt more and more keenly small organisations like SE24 are pooling their expertise and enthusiasm and making an active response.

I am impressed too by the way SE24 is working with local organisations including local authorities and how this in turn is  creating interest among some of the larger companies.

You are also an artist, how does your art work reflect your values and life here in South east London?

When I am not at St Christopher’s I am often pursing my interest in painting and printing. I am a long term resident of Brixton and some of my work reflects the colour and vitality of the local area.  I am influenced by English visionary painters like Stanley Spencer and William Blake.

You can see some of my artworks on my website here.

Some of my work is also on public display in SE24. As part of the West Dulwich Festival local artists were invited to submit designs for street banners. My ‘Number 3 Bus’ design was one of the twenty designs chosen. It is on show in three locations along the number 3 bus route.

How you can get involved in SE24

Partners: SE24 is looking for more partners such as St Christopher’s who have large roofs, who consume lots of electricity, but who do not have the time or expertise or funds to install solar panels themselves. If you work for such an organisation and would like to talk to SE24 please see this presentation here or e mail us one of the addresses below.

Investors: To find out more about investing in SE24 see this page here. All investors automatically become members of the Community Benefit Society and able to influence the future policy of SE24. If you want to be kept informed about future share offers please e mail us on one of the addresses below.

Volunteers: Many people who do not have large roofs or spare money to invest still want to get involved in the community energy movement. SE24 is entirely volunteer run. If you have skills and time to offer please e mail us on any of the addresses below.